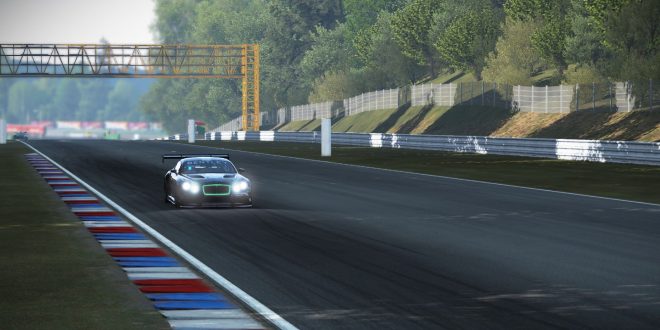 As some of you may know, for personal reasons a couple of years ago I (Rich) had to take a step back from Sim Racing. It’s funny how much you miss something you take for granted when you can’t do it anymore. The release, the escapism, the competition, the banter, the friends, the rivals – All of it. Returning to sim racing is big to me.

I recently returned to the fold. After speaking with Pitlanes friends of old, the pull of iRacing was strong. It’s where the majority of the pitlanes community initially came from and continues to be, albeit doing their own thing, generally now.
The problem is, I’ve never made a secret of iRacing being my least favourite sim. I’ve never clicked with it. I’ve always suffered with rear end vagueness and random happenings I can’t explain. So these thoughts coupled with it being, by a gigantic margin, the most expensive sim there is, I’ve not renewed my account and I’m not sure I ever will.

So, where will I race? Well, I looked on my Steam library. Automobilista, Assetto Corsa, rFactor 2, Raceroom and Project Cars. There is plenty right there.

While I can already hear people saying “Raceroom, really?!” I feel like it and Project cars get a bit of a raw deal. I myself have been particularly critical of pCars in the past. I feel, probably, unfairly.

When I sit back and actually look at the feast of quality racing games on the market now. It excites me. While iRacing has the crown of organised pickup racing, that’s all it has the crown for in my humble opinion. I suppose you could add circuits in to that, with their fairly incredible texturing and modelling work. I refuse to cite laser scanning as a selling point. Laser scanning something doesn’t guarantee an incredible end product, it just aids it. It’s accurate, yes, but go drive around Atlanta Motorsports Park on rFactor 2 and tell me the fidelity isn’t incredible. That wasn’t laser scanned.

This may seem like a bash on iRacing so far – it’s not. It’s just fans of it tend to be extremely defensive. I’m just attempting to justify my standing on it.
Onwards.

In my first evening Returning to sim racing, I jumped in a USF2000 at Bathurst and a Stock Card at Indianapolis, both on rFactor 2. Then In to a Caterham at Cadwell on Automobilista. The second night I jumped in to a Carlsson SLK 340 Judd at Portimao on Raceroom, then a Bentley Continental GT3 at Bruno & Catalunya on pCars.

The sheer volume of content that we have at our fingertips is incredible. While it’s all good for someone to enjoy a certain thing. Coming back to Sim Racing I do wish people could be less partisan about “Their Sim”, take a step back and just appreciate we’re so spoilt.

All of these sims genuinely offer something different from each other while covering exactly the same genre of gaming. The diversity of what all these dev teams provide is pretty special.

With GTR3, pCars 2, Studio 397 taking over development of rFactor 2 and iRacing adding dirt and continually plodding along in their quarterly development cycle – The future is bright and exciting.

I’m glad that coming back the Sim Racing genre is still growing and going from strength to strength.
Enjoy it guys – Don’t take it too seriously and have fun!

Returning to sim racing, I’d love to know what you guys enjoy most about sim racing, what your favourite sim is and why and what you’re looking forward to most in the future of sim racing be it long or short term.

Let me know in the comments or head over to the forums and start a topic.