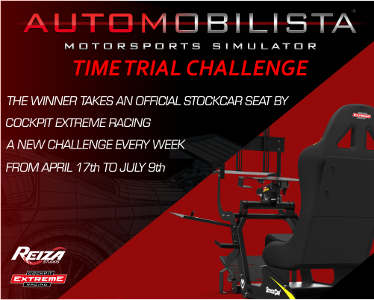 Rezia have been this week with a new update to their sim title Automobilista bringing it up to version 1.3.7 which also saw the launch of a time trial competition with the chance to win a new sim racing rig. Ok lets deal with the new update first and this is more of a hot fix to build 1.3.5 but its always nice to see a developer keeping on top of their sim with a steady stream of updates and fixes.

Moving on to the new time trial competition which is a reboot of the weekly challenges Reiza have been running via their online portal for a while now, which was just for a bit of fun and some bragging rights !

But now its all gone official and there is a very special prize up for grabs at the end of the 12 week competition.

The winner will get a Stock Car Racing Seat rig –

The weekly time trials are posted up on the Automobilista portal

which can be found by – CLICKING HERE

Here is a quick run down of how it all works,

Over the next 12 weeks starting April 17th up until July 9th a new round will start featuring an unique car / track combo. Contestants should select that combo in Time Trial mode at any point during the week to register a time, which will be ranked against the best from the other participants. Current standings will be available both from the in-game timing screen as well as from the VX portal TTotW page. Each round will only be announced on the Friday preceding it.

The good news is that we all stand a chance of winning something through prize draws,

There will be a second Stock Car Racing Seat awarded by drawing amongst all participants. To get a ticket in the draw, all you need to do is register a lap within 107% of the best time set that week in any of the 12 rounds. You can accumulate up to 12 tickets in the draw for every round you participate with a valid lap – the more rounds you take part in, the better your chances!

You can find Automobilista on Steam – HERE